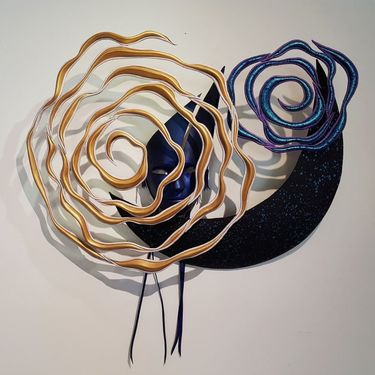 "Metamorphosis" was a solo touring exhibition of leather mask sculptures which was displayed at an unprecedented 21 regional art galleries across Australia, curated by and commencing at the Stanthorpe Regional Art Gallery in April 1996 and returning to Stanthorpe to finish in June 1999.


Michael has also had a solid career as a sculptor in many other mediums. He has regularly been an invited participant in such prestigious exhibitions as the Helen Lempriere National Sculpture Award in Victoria; Swell Sculpture Festival in Queensland and Sculpture by the Sea in Sydney, NSW. Works have been commissioned for public and private collections and are held by the Gold Coast City Art Gallery;  Sunshine Coast Regional Council; Gold Coast City Council and Townsville City Council.
A STATEMENT REGARDING COPIES OF MICHAEL'S MASKS; " Three mask designs were commissioned, manufactured and distributed by a company overseas for promotional purposes. These three masks are made of painted fibreglass and have now been sold worldwide. The one-of-a-kind leather masks, on the other hand, are created by Michael in his studio in South East Queensland."